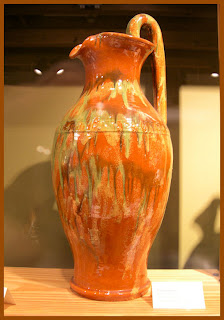 The Rebecca jug is an enduringly popular form of North Carolina art pottery. The "Rebecca" got its name from illustrations of the Biblical story of Rebecca at the Well (in Genesis, Chapter 24). The classic shape of the Rebecca is that of an ewer (a vase-shaped water jug) with an elongated, over-arched handle. While single-handled pieces are the norm, there are also large two-handled ewers known as "Double Rebeccas." Right: Joe Owen Rebecca on display at the North Carolina Pottery Center.

Note: click on any image for a larger view

Although not unique to North Carolina art pottery, the Rebecca jug developed a strong association with the Tar Heel State during the 1930s, when many tens of thousands were made for customers, the tourist trade, and resorts. The 1932 J B Cole catalog listed three Rebecca jugs in sizes from 10½" to 17½", while the 1940 catalog lists six Rebeccas ranging from 4½" to a monumental three-footer. Much of the production of Rebeccas was unmarked, even by potters who normally stamped their wares, because these pieces often were moved in wholesale lots. 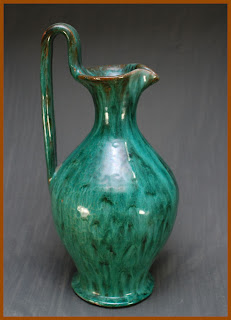 Left: Rebecca jug by Waymon Cole, 1940s. Identification of vintage Rebeccas can be a challenge because so many of them were unmarked. Nonetheless, there are typical elements which can help to identify the maker. Small, mid-sized, and some large Rebeccas usually have a pedestal base with a rolled bottom edge, a rounded body, a tapered neck, and a rim with a spout, plus the handle. Some larger Rebeccas were made without the pedestal base. Points to observe include the thickness and height of the pedestal, the shape of the body (ovoid, semi-ovoid, or rotund), the length and taper of the neck, the width and flare of the rim, the shape of the spout, and the formation and attachment of the handle. 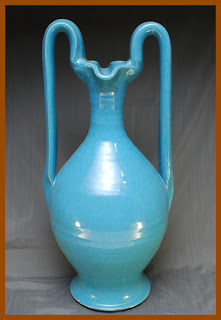 Right: Double Rebecca attributed to J. B. Cole, 1930s. The potters who made these wares depended on high rates of production for their living. The numbers they turned out are quite remarkable in comparison to modern studio art potteries; C. C. Cole Pottery, for example, produced small wares (honey jugs, cider jugs, Rebeccas, and so on) at the rate of five thousand to ten thousand per week during the peak season. The need to produce such numbers meant that the turners developed routine, characteristic ways to make the pots. For example, in the case of Rebeccas, there are three options for the top handle attachment: on the outside of the rim; on the inside; and straight on. Once a potter established his or her routine, it was followed faithfully to produce many pieces which share common traits. 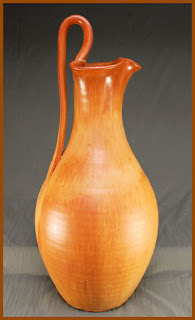 Left: Rebecca jug by Thurston Cole, C. C. Cole Pottery, 1950s. Glazes offer another means of identifying vintage Rebeccas. A pottery would use the same glazes for Rebecca jugs as it did for other forms, so that becoming familiar with a particular shop's range of glazes and glaze results helps to narrow the possibilities. Certain glazes were used by more than one pottery -- the lead-rutile matte glazes, for example -- but even so there can be differences in the end result. A. R. Cole Pottery fired its red-clay wares to a higher temperature than most others, for example, producing lead-rutile glaze results that are glossy and highly variegated. For another example, C. C. Cole Pottery's polychrome glazes are as familiar on its Rebeccas as on its honey jugs and cider jugs. 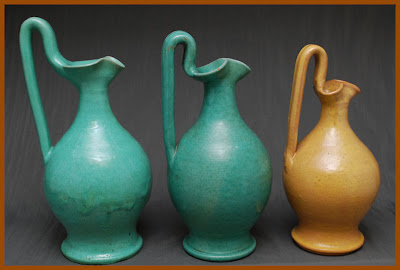 Above: Early Rebecca jugs dating to the 1930s. The backswept handle seen on the jug on the far left was used during the early 1930s but was abandoned possibly because it required too much space in the kiln compared to upright and overshot handles. 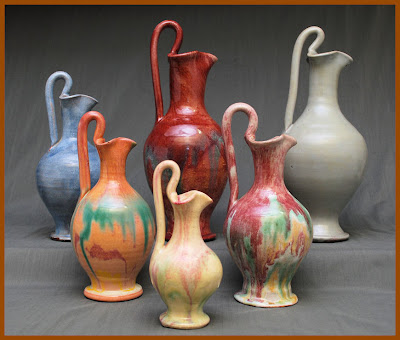 The Rebecca jugs shown above all are attributed to C. C. Cole Pottery (although I am open to persuasion as to the gray jug on the far right, back row). The Rebeccas on the back row are attributed to Thurston Cole and on the front row to Dorothy Cole Auman. 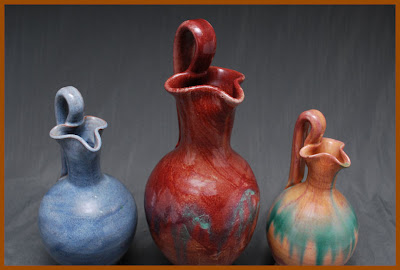 This image shows the handle attachment (on the outside of the rim) and spout formation typical of C. C. Cole wares. The neck of Rebeccas made by Thurston Cole is thicker than is seen on those made by Dorothy Auman. 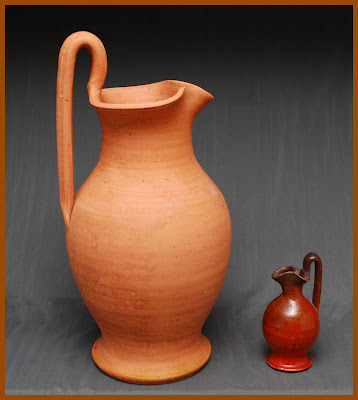 Rebecca jugs by Joe Owen. Note the short, thick pedestal, ovoid body, thick neck, and moderate rim flare, plus straight-on handle attachment. The overall look of Joe Owen Rebeccas is stout, whether in a small or a large size. 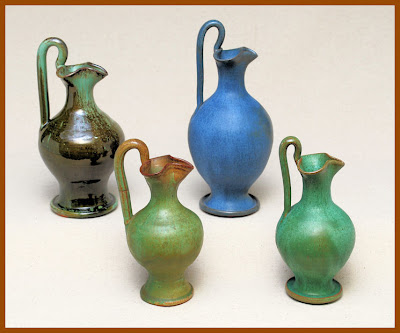 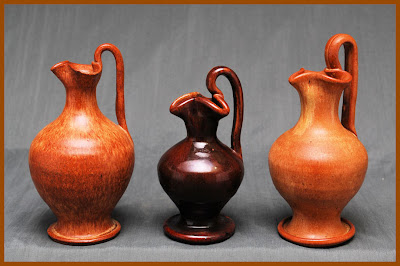 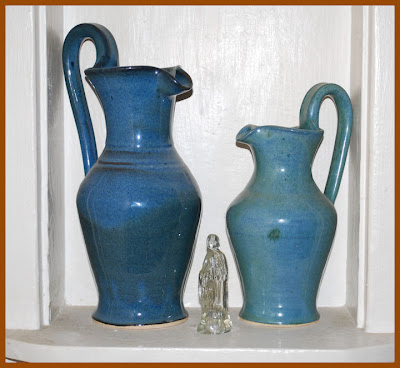 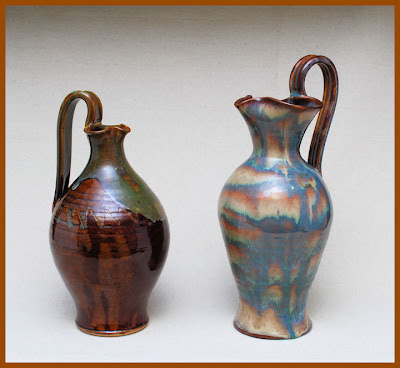 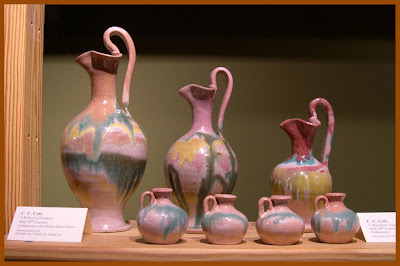 Thank you! I've been trying to ID mine for 20 years, and now I'm confident enough to say it's a Rebecca Jug by a Cole in Red Eye Gravy. It isn't signed but has the three marks forming a triangle on the bottom like other old Coles. I really appreciate this page.

Oh goodness! Maybe it's brown sugar. I've not seen those. Would love to show you if you'd be interested.

I know this was posted a while ago, but it is still very helpful! I bought a large Rebecca jug recently for $2 at an estate sale (it does have a chip on the lip). I don’t have your eye for the nuances of each potter, so don’t know who made it. But it definitely was by some Cole potter. It is a glossy turquoise, robust bulbous body, and thin neck. Wish I could post a photo :-)

Hello, Ebay sellers and online resellers, If you are looking for wholesale liquidation pallets
Check out Takeitbythepallet they have tons of affordable branded pallets that you can buy and resell for good profit margins