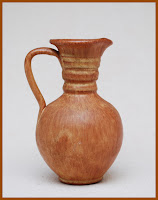 Pitchers and jugs are my favorite forms of art pottery -- and I include along with pitchers, cream and sugar sets, which provide a pitcher plus a bowl. Bonus. If a potter "sees me coming," he or she will place a few colorful pitchers at eye level. I actually use some of them, mostly for watering plants and other low-risk tasks, although most of these illustrated live in display cabinets or on high shelves. Right: Long-necked pitcher attributed to Thurston Cole, C. C. Cole Pottery.

When Jugtown Pottery kicked off the North Carolina art pottery movement in the early 1920s, its owners focused on two lines of ware: traditional lead-glazed "dirt dish" earthenware and new, colorful pieces based on oriental designs. Potters in the surrounding area observed no such strictures; whether by genius or by serendipity, they used colorful art-pottery glazes on anything that went into the kiln, pitchers included. The pitchers sold and, some nine decades later, they still sell. 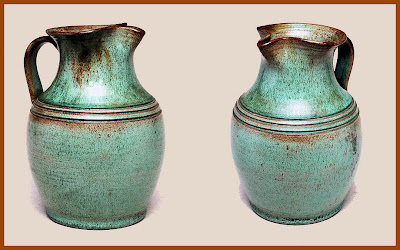 The form and finish of the art-pottery pitcher demonstrates the range of the skills of the maker: the turning of the body; the formation of the spout; the attachment of the handle; and the selection and application of the glaze. As with other forms, each potter tends to develop characteristic methods which help to identify the maker even when a piece is unmarked -- and there a many unmarked, vintage pieces. 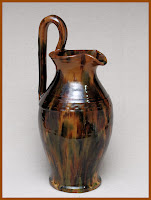 Left: The Rebecca Jug is also known as the Rebecca Pitcher. This example by Joe Owen illustrates the essential elements of the pitcher -- rounded on the lower body, necked in above, a widened rim shaped to form a spout, and an added handle.

As a utilitarian form, pitchers were made by all traditional potters, both in earthenware and stoneware. However, while a straight-sided vessel with a minimal spout and a plain handle would have been sufficient for the purpose, these working potters showed a high degree of artisanship in the making of such items. This may have had a commercial impetus -- a nice-looking pitcher would fetch a penny more than a plain one, perhaps -- but it also reflects the desire of many makers to turn pots which had a touch of artistry. 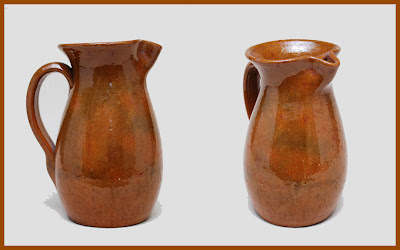 Pictured above: the genuine article -- a redware pitcher "slicked" with a clear lead-fluxed glaze. This example, with an ice lip, was found in North Carolina, maker unknown. It displays a simple elegance of form and function. The colors in the glaze are from impurities in the clay, rather than deliberate decoration. 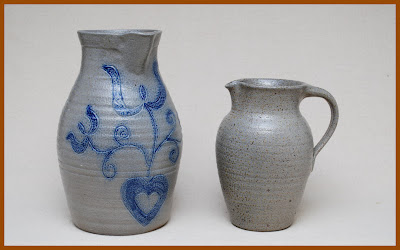 When salt-glazed ware came to dominate the pottery trade during the 19th century, it was often fired green and plain, any embellishment being provided by the effects of the wood fire and the occasional kiln drip. Sometimes potters would decorate their pitchers and other utilitarian items with designs in cobalt oxide brushed on before firing. Cobalt oxide retains its blue color at the high temperatures needed to mature stoneware and cobalt sulfate, a water-soluble form, could be brushed on to decorate greenware without requiring a bisque firing. The examples shown above are modern interpretations of 19th-century forms, made by David Farrell of Westmoore Pottery. 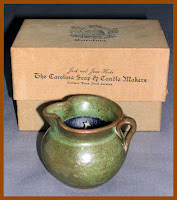 During the 1930s, two markets developed for art pottery pitchers -- so-called "tourist pottery," small-to-medium sized pieces turned and fired in quantity for the tourist-shop trade, and small pieces made for the soap-and-candle enterprises, also made in wholesale lots and marketed in gift shops as well as tourist stops. Pitchers in the form of small creamers were easily adaptable to both markets. At right, an example of a small creamer outfitted with scented wax and a wick, then boxed for retail sale -- in this case, by the well-known Carolina Soap & Candle Makers of Southern Pines, North Carolina.

On the left, a pair of tourist-pottery creamers. The very small "left-handed" cream pitchers were usually sold in Virginia as "Williamsburg Hand Made Pottery." The larger creamer may have been sold to any one of many tourist shops and resorts, often in the Shenandoah Valley of Virginia or the vicinity of the Great Smoky Mountains National Park in North Carolina and Tennessee.

Although the tourist-pottery trade generally called for glossy lead glazes colored with ceramic oxides or "stains," the candle-makers had a preference for matte or semi-matte lead-rutile glazes. These glazes were initially purchased commercially from a firm in New York City. Of course, the potters in the Old North State didn't hesitate to use such glazes on other forms, and lead-rutile mattes were quite popular until the Federal restrictions on lead content eliminated them in the early 1980s. At right, a pitcher by Thurston Cole of C. C. Cole Pottery glazed in a blue lead-rutile matte glaze. 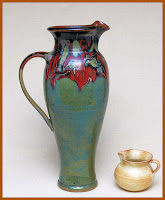 modern era has seen a return of stoneware to dominate the market. Some stoneware is fired at moderate temperatures -- Orton Cone 6 or 7 -- but most of it is cranked up to Cone 10 or Cone 11, exceeding 2400 degrees F. So while the lead-rutile mattes are gone, in their place have come varieties of stoneware art-pottery pitchers -- some wood-fired, some with exotic glazes, some propane-fired in reduction. Shown at left: a tall, elegant, polychrome-glazed pitcher by Benjamin Burns, Great White Oak Pottery in Seagrove, North Carolina; illustrated for perspective beside an M. L. Owens cream pitcher. 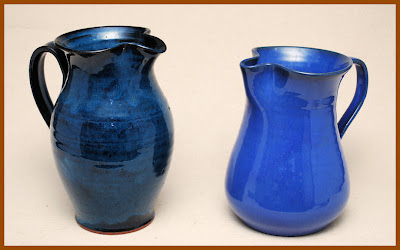 Above: Earthenware pitchers from the modern (post-1980) era of Seagrove Pottery; on the left, M. L. Owens Pottery, and on the right, J. B. Cole Pottery (by Linda Potts). 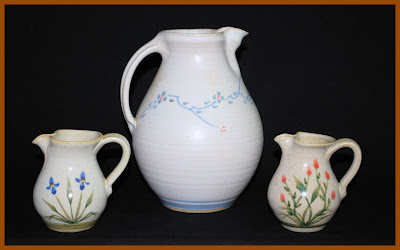 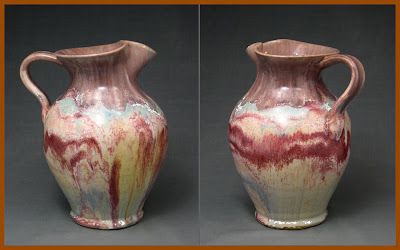 Two views of a vintage polychrome-glazed pitcher by Thurston Cole, C. C. Cole Pottery. The colored lead glazes in this piece have run and blended to give a unique result to the finished piece. C. C. Cole Pottery workers applied a whitish body glaze, then dribbled bands of color around the body, and finally dipped the top of the piece in another colored glaze. 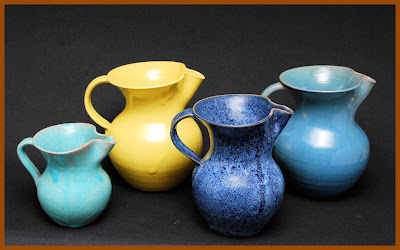 Above: Four pitchers by Phil Graves of J. B. Cole Pottery. The two in front are from the 1930s, made with Michfield light clay; the two in back are post-WWII, made with Smithfield redware clay. 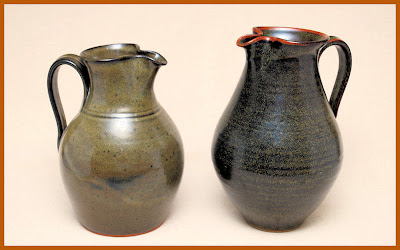 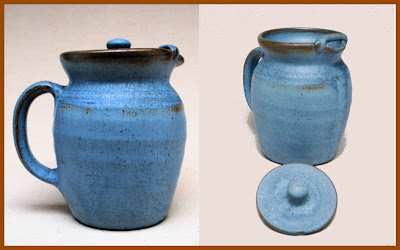 Above: Ice-water pitcher with lid, Seagrove Pottery "Crystal Blue" glaze, made and glazed by Walter Auman and marked with the date "1976." Walter formulated Crystal Blue in the early 1970s, following the first imposition of Federal restrictions on lead-glazed pottery. The result was a soft, semi-matte finish, lighter in tone than the lead-rutile matte blue previously used by Seagrove Pottery and C. C. Cole Pottery. At its best, Crystal Blue was a beautiful glaze, but it had some problems -- it was subject to gross crazing and often was porous, which made it unsuitable for tableware. In the 1970s, many buyers of North Carolina

pottery put their purchases into use -- including the author, who had no inkling what "mint" examples would come to be worth! Left: Walter Auman (standing) and Seagrove Pottery apprentice, whose name has escaped me, photographed by your author in July of 1976 in their tent on the National Mall in Washington, D.C., while participating in the Smithsonian Institution Folklife Festival. 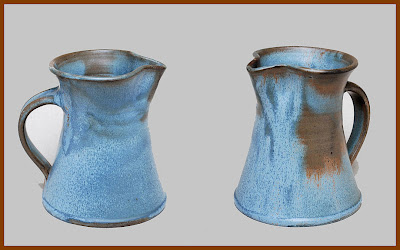 A later reformulation of Crystal Blue produced a very similar glaze which produced a variegated semi-glossy finish. Known as "Stone Blue," it is attractive and popular in its own right, although it lacks some of the softness of Crystal Blue. The reduction of the lead oxide content of glazes was typically accomplished by substitution with some boron oxide, which is suitable for firing at earthenware temperatures but is inherently glossy. When further reductions in lead oxide content were mandated in the early 1980s, semi-matte and semi-glossy lead-rutile glazes were no longer practical. 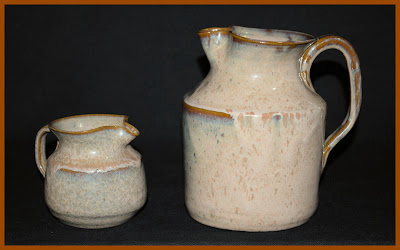 One of the more remarkable glazes produced by J. B. Cole Pottery was "Dove," a temperamental glaze from the 1970s and early 1980s which came out very well on these two pitchers. "Dove" gave varying results from one kilnload to another, sometimes darker, sometimes lighter, sometimes more blue and sometimes more gray. It was used in limited quantities and is relatively scarce. 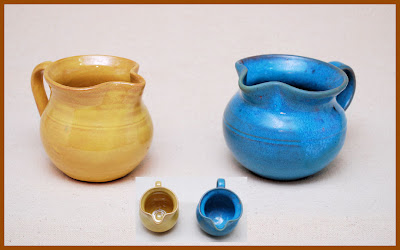 Two cream pitchers by M. L. Owens. The yellow creamer on the left is inscribed "Owens" in Melvin's hand. The one on the right is from a cream-and-sugar set bearing a paper label attached by a purchaser indicating the origin to be C. C. Cole Pottery. The glaze is consistent with C. C. Cole and the blue creamer may have been glazed and fired there, but it bears the unmistakable "hand" of M. L. Owens -- including the characteristic spout formation and an out-of-round rim having identical placement and degree in both cases, as shown in the inset. Potters often turned wares for other shops; M. L. Owens is known to have made pieces for Jugtown. 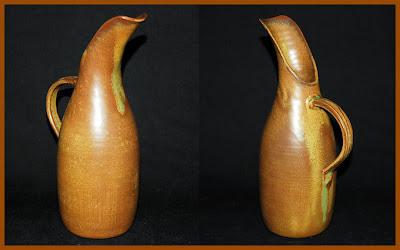 Two views of a tall J. B. Cole Pottery wine pitcher made by Phil Graves and glazed in a Bronze-Green finish. There were several iterations of Bronze-Green, which was produced by over-firing aqua or blue-green glazes. 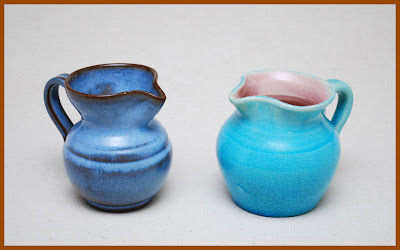 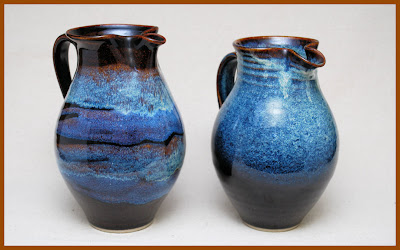 Blue stoneware pitchers by Mark Heywood, Whynot Pottery, Seagrove area. Blue is so popular with buyers and thus is produced in such quantities that potters often become sick of looking at it and begin muttering dark threats about its demise. 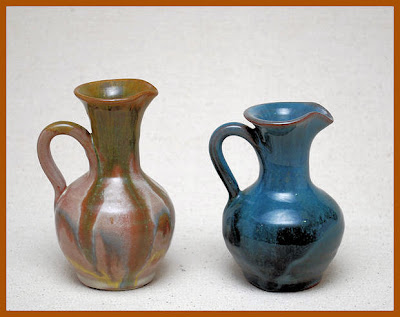 Long-necked pitchers made by Dorothy Auman at Seagrove Pottery and glazed by Walter Auman. Like C. C. Cole Pottery, Seagrove Pottery made polychrome-glazed pieces but with a different color palette and application pattern. The blue pitcher on the right is from the 1980s and shows the impact of removing lead from the glazes -- the boron oxide content mandates a glossy finish.NOTE: A longer version of this article with many more pictures is available on the author's Web site -- click HERE to read and view.

Text and images copyright 2009 by J. R. Henderson. This article was originally published in Backcountry Notes. Reprinted by permission.
Posted by about me at 7:14 PM

I just discovered NC pottery about 15 minutes ago and found this site shortly afterward. This is stunning stuff - some of the most beautiful I have ever seen. Wow!

I have an old milk jug that my grandma gave to me...signed by W. Henry Chrisco.

Would like to see that! We may be related!