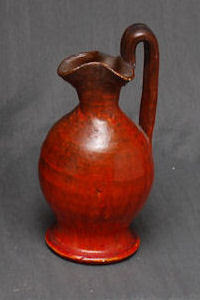 About a year ago, North Carolina pottery collector Peg Wiebe mentioned that she had used an ultraviolet light on pottery -- this can be used to detect repairs, for example. Intrigued, I did some reading and found that UV light can induce fluorescence in certain minerals, including uranium oxide. Cazart! A means to test the assumption that North Carolina potters used uranium oxide glazes! However, neither Peg Wiebe nor I have, so far, found a pre-WWII orange or red glaze which responds to UV light.

So why did most North Carolina potteries discontinue chrome red glazes after WWII? One assumption had been that the orange-red glazes couldn't be made once the U. S. government monopolized the supply of uranium oxide during WWII. Not so, it appears. Part of he answer may be changes in consumer preferences -- the 1940s and 1950s saw a shift to pastels and the 1960s a shift to rustic glazes. Probably more important was the necessity to adopt economies of scale in the post-war era in order to survive against competition from factory-made and imported wares.

Chrome red glazes are restricted to earthenware fired to Cone 08 or below, with Cone 010 being typical, and a finishing temperature of no more than 1750 degrees F. Above that temperature, chromium oxide changes to a green color in a lead glaze. (Exposure to a reduction atmosphere during firing will also turn the glaze black.) This firing range is much lower than the North Carolina potters used for earthenware and far below the Cone 3 (more or less) temperatures achieved at the J. B. Cole and A. R. Cole operations. Thus, chrome red pottery would have to be fired by the entire kilnload -- and that became economically impracticable as consumer tastes changed.

One persistent myth is that J. B. Cole Pottery used gold dust in its pre-WWII chrome red glazes. I can identify the source of this myth -- it came from Waymon Cole, who had an impish sense of humor and foisted the gold-dust story off on me in my gullible youth. Not until four decades later, when I began to take pottery classes at a local community college and studied clay and glazes, did I realize that Waymon had been pulling my leg. Gold is used in ceramics, but its use is very limited, partly by its volatility when heated to high temperatures and partly by its expense.

Consider this: in the late 1920s, the price of gold ran $21 per ounce -- about $260 per ounce in today's money. J. B. Cole's Pottery mixed its glazes in huge lots -- clawfoot bathtubs, for example. The cost of mixing in enough gold dust to have an effect on the finished glaze would have been prohibitive. Granted, chromium oxide isn't cheap, but at about two bits to a buck a pound, it was much more affordable than gold dust.

I cannot, of course, eliminate either possibility -- that some NC art pottery glazes contained either uranium oxide or gold dust. But in the absence of evidence, one must presume that neither was used. If anyone finds a vintage NC art pottery glaze that fluoresces under black light -- please send me pictures!

THE HISTORY OF URANIUM GLAZES

Uranium oxide added to a lead-fluxed glaze produces a spectrum of bright, attractive colors ranging from ivory, yellow, and orange to deep orange-red, depending on the amount added and the other characteristics of the glaze composition. The dark orange-red versions of uranium glazes are often spotted or streaked with black or cream-colored areas.

The glazes were very popular during the pre-WWII art pottery era and remain popular with collectors today - - good examples bring premium prices, especially for deep red pieces, even though this glaze is among the most available from that time. While uranium oxide has recently become available to potters once more, restrictions on the use of lead are likely to preclude the return of the lead-uranium glazes found on vintage art pottery pieces.

Although uranium glazes had been developed long ago (written formulas survive from the mid-19th century), they were not widely used until the 1920s. Following the discovery of radium by Marie and Pierre Curie in 1898, pitchblende was mined and processed for its very small radium content (about one gram of radium per three tons of pitchblende), resulting in the production of many hundreds of thousands of tons of uranium oxide compounds as by-products. These by-products were sold inexpensively for various uses, including glass and ceramics, until World War II. "Vaseline glass" made during the Depression era uses uranium oxide to produce its green hue.

Uranium pottery glazes were used commercially until 1943, when the supply of uranium oxide was monopolized by the United States government during the development of the atomic bomb. A familiar example is the "Fiesta" line produced beginning in 1936 by the Homer Laughlin Company of West Virginia, which used uranium oxide to make Fiesta Red and Fiesta Ivory glazes. The J. A. Bauer Pottery Co. in California reportedly used 450 pounds of sodium uranate per week during the 1930s.

The color of the finished glaze is determined by the amount of uranium oxide added to the base. Sodium uranate was the most common form of the oxide used by potteries. Because uranium oxide remains in a refractory state and does not contribute to the fluxing of the glaze, it can be added in relatively large amounts. Depending on the other constituents, lead-fluxed glazes would be colored yellow by additions of 5% to 10% sodium uranate by weight; orange by additions of 10% to 15%; and red by additions of 15% to 20%.

Finally, uranium oxide remains radioactive even when melted in a glaze. It can be detected with a real Geiger counter (not one of the yellow civil defense models; those are not real Geiger counters) and sometimes by the use of ultraviolet light. The response to the Geiger counter or "black light" is weakest for ivory and yellow versions, and strongest for the deep orange-red glazes. (Note that not all uranium glazes respond to a "black light.")

Is vintage uranium-glazed art pottery safe? Probably, as long as you don't use it to decant acidic substances such as orange juice, which will leach both lead and uranium from the glaze. A few pieces of uranium-glazed pottery in a collection are unlikely to be hazardous, although a large number in an unvented room might be; see the References for articles on this subject. Ironically, the most radioactive ware was Fiesta Red made by Homer Laughlin from 1959 to 1972, using depleted uranium which the Atomic Energy Commission had made available for commercial use; depleted uranium is far more radioactive and toxic than sodium uranate and resulted in glazes that produced radon.

Copyright 2010 by J. R. Henderson. This article was originally published in Backcountry Notes, which provides references to source articles. Reprinted by permission.